The death toll from Nepal's April 25 earthquake now stands at 8,019, the country's National Emergency Operations Center said Sunday.
Also, 17,866 people were injured and 366 are still missing, the center said.
It's been more than two weeks since the magnitude-7.8 earthquake rocked Nepal, and the death toll continues to rise.
Tremors from aftershocks were still being felt as recently as Friday, when a magnitude-4.7 temblor struck south of Kodari, according to the U.S. Geological Survey.
As aid flows in from around the world, officials are trying to get a handle on the scope of the damage. At last count Thursday, the National Emergency Operations Center estimated that more than 10% of the country's homes were destroyed (299,588) or damaged (269,107).

From Kathmandu, the account from our organiser there about the last few days, dated 30 April.

Frequently earthquake is coming, we are scared. From morning 5 times it came, just few minutes ago, it came and we ran out from the house. It produces so bad sound of cracking. So problematic!

More than 5000 dead bodies are recorded, however covered dead bodies with debris are still to be taken out, esp. of Kathmandu and Bhaktapur. Bad odour started to come while walking on the streets of Bhaktapur.

It has been raining, particularly night. For five days we stayed outside in the self made plastic tent with neighbours around 100, sitting all night, without sufficient water and food. For few minutes we dare to enter into the house during those days for getting water and food. Shops to buy things are closed and all the things are also finished because of no supply from outside. Goods are supplied in Kathmandu by India and Terai of Nepal.

From last night we dare to sleep on ground floor by the main door altogether but many shocks we felt and stayed alert to run outside. We can't explain in words the situation we are facing. The problematic situation is that the tent cannot protect us from the unwanted rain. We are in the verge of getting sick due to the cold. Children got cold and cough and I am not well.

The weather at night is chilly, with cold wind. If same situation remain for a longer time we certainly starve. Food price has been raised and many people who are from outside valley, are running away from home here- thousands and thousands in number. School of Dhanusha is safe because the earthquake in that area is weak and Namuna's previous school is safe but her new school' s wall is broken, but building is in good condition. Anyway we are happy because we are safe and alive among so many dead people.

With love to you all 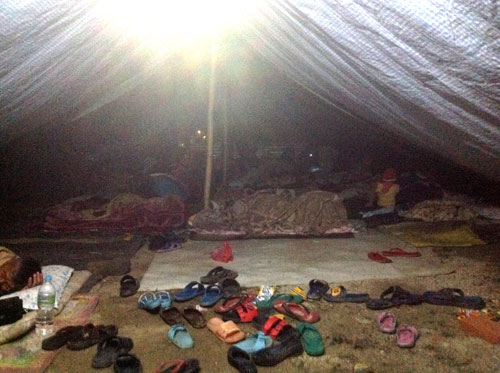 Ashraya Nepal UK is a registered charity in England and Wales, Charity Number 1144306